Letter from Washington: NFIP harm in the Puget Sound

This post was co-authored with Jim DiPeso, vice president and policy director of ConservAmerica, a conservative environmental organization, and a resident of Shoreline, Wash.

The Puget Sound plays a vital role in Washington state’s economy. Two of the state’s four largest cities are on the sound, much of the state’s tourism relies on it, and the quality of life that attracts so many people here would not exist if not for the sound. 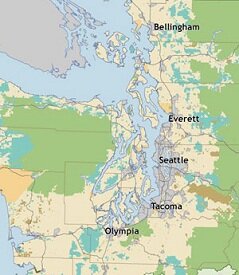 Given Puget Sound’s importance, the two of us, as conservatives, believe private landowners and independent entrepreneurs are usually the best stewards of the millions of acres that touch the sound. That’s why we’re concerned about a little-known federal program that’s breaking its own rules, wasting taxpayers’ money, and damaging the sound.

Some background: The National Flood Insurance Program insures property owners against flooding. Unlike private insurers, who set rates based largely on risk and thereby discourage development in particularly disaster-prone areas like steep hillsides and sand dunes, NFIP charges far less for the same coverage. As a result, the program actually encourages development in some of the most flood-prone areas of the country.

Not surprisingly, NFIP also loses a lot of money for taxpayers. The 40-year-old program is currently about $18 billion in debt to the federal Treasury. There is no practical way for NFIP to pay it back, so eventually it’s going to add to the already huge federal debt.

Around Puget Sound, experts consulted by the NFIP’s overseers at the Federal Emergency Management Agency agree providing flood insurance in certain areas would, for all intents and purposes, give developers an incentive to destroy floodplains and damage key wildlife habitat.

It’s an awful idea. Letting local communities and private developers decide how to use land in floodplains is one thing. Saying they’re entitled to government-subsidized insurance to do it is quite another. But that’s just what NFIP is doing.

Stopping the federal government from subsidizing environmental destruction is something on which people on both the Left and the Right should agree. That’s why we’re pleased that a liberal environmental organization—the National Wildlife Federation—is fighting a court battle to get the federal government to follow its own rules and stop harming the environment in this way. If anything, we would have preferred NWF to have gone even further. Its current lawsuit seeks only to prevent new subsidies; it doesn’t attack the billions of dollars in flood-related liability that developers already have foisted on taxpayers.

No private entity does or even could do as much damage to Washington State’s floodplains as the National Flood Insurance Program already does. Letting it grow further, as many developers want it to do, would inflict real environmental harm.

Although a few more tract houses, shopping malls, and the like might help the local economy in a few places, a healthy Sound is key to Washington State’s economic future. Those who want to take the risk of building in floodplains should at least be required to insure the projects themselves at appropriate rates. Government should get out of the way and let the market deal with flood problems. That would save taxpayers money and help the environment.