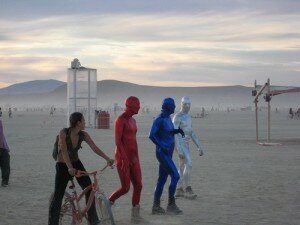 Burning Man – the annual week-long, 50,000-person bacchanal in the Nevada desert – is coming up at the end of August, and as I started hearing from people about the fire sculptures they were bringing to the event, and the concern that they might run out of water while they were camping in the hot hot desert for a week, and other elements of their time in the desert, my thoughts of course turned to insurance. Namely, how in the world is it possible to get the right kind of insurance for a notoriously drug-filled, fire-filled, maybe kind of danger-filled, sun, wind, and sand-addled festival?

Burning Man’s press office said they don’t want to talk about insurance. “It’s not really something we care to have written up,” said the person I spoke with on the phone, who explained that insurance is the kind of “back-office” enterprise that people interested in Burning Man really be concerned with.

Luckily for us, my guest on this week’s podcast is someone who specializes in festival insurance. So, come Friday, we will all know, how it is possible to get the right kind of insurance for a gathering that would, at first blush, seem uninsurable.

Next post: Be Wary of “Consumer Advocates” Bearing Gifts