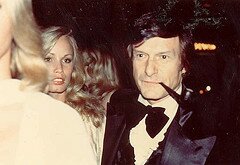 Hugh Hefner in 1978 - photo by Alan Light/Flickr, used under a Creative Commons license

Playboy Enterprises and Sears were both founded in Chicago, but they are pretty much opposites of each other. Playboy is usually associated with a mansion in Beverly Hills rather than an office building in Chicago, while Sears is more is associated with an office building in Chicago rather than things found only in a gardener’s shed in Beverly Hills. Both companies have been undergoing years of transition. Playboy announced on January 11 that it would go private. The private-equity group was led by Hugh Hefner, the company’s founder, and includes Rizvi Traverse Management LLC.

As a public company, Playboy had a few strikes against it. Hugh Hefner had voting control, which made institutional shareholders leery. And, the business itself made enough investors squeamish to create a liquidity discount: it could be hard to find buyers if an investor needed to sell a position.

Ultimately, Playboy is more publisher than pornographer; its business model depended primarily on subscriptions and display ads, and demand for both have been declining as readers can find other ways to get pictures of naked ladies and celebrity interviews and advertisers can find other ways to reach those readers.
Private equity only works if there is a successful exit. The challenge is to turn the business around to make it attractive to another buyer. Who? That’s hard to say.  And, an 84-year-old man is calling the shots.  The management succession issue alone seems troublesome, and does he know what the young kids nowadays want?

The private-equity plan seems to be to focus less on publishing and more on licensing the heck out of the bunny-ears logo, with discussions of reviving the chain of Playboy clubs, opening Playboy casinos, and selling branded clothing. That might make the company attractive to a buyer outside of the publishing industry, and possibly to someone outside of the United States.

As for Sears, who knows what’s happening there under the regime of investor Eddie Lambert. I can’t stand shopping at Sears. However, today I am most grateful for the reasonably priced, super-warm coats sold by its Lands End subsidiary. I doubt any of Hef’s wives have ever owned such a thing.

One of my sisters says that there is no one more pathetic than the person who buys scratch-off lottery tickets, then has the ticket agent scan them to see if they are winners rather than go through the trouble of scratching.

Many states rely on the lotteries for budget revenues, and Illinois is no different. By law, Illinois lottery ticket sales must be used to fund education, although the legislature has approved a handful of different special fundraising scratch-off tickets to raise money for special causes. Right now, for example, Illinois is promoting a special $2 Red Ribbon Cash lottery ticket with the net proceeds going to programs for people with HIV and AIDS.

It’s all nice PR, I suppose, but it also shows how terribly hard it is to get the state legislature to focus on things like the budget matter at hand. The lottery is a tax on the stupid, economists often say, because players can expect to lose money. To me, it seems more fair for everyone in the state contribute to education and human services rather than expect gamblers to bail us out.

Che Smith, the Grammy-winning singer and songwriter also known as Rhymefest, is running for alderman in Chicago’s 20th Ward, a mostly working-class area including the Back of the Yards neighborhood. That’s as in stockyards; the region figures prominently in The Jungle, Upton Sinclair’s 1906 expose of the meat-packing industry.

It’s an unusual job quest for a celebrity. Alderman isn’t a job rich in ceremonial trappings, like US senator. In Chicago, it’s a hands-on position. People expect the snow cleared, the trash picked up, and the rats killed. When they have problems, they call the alderman.  They want the alderman to show up for school career days, volunteer at food pantries over the holidays, and help their kids get jobs with the city.

Rhymefest has four opponents in the election, so it’s hardly a done deal, but it’s been fun to watch.

Not married to Hugh Hefner,

Guest columnist Ann C. Logue is a lecturer in finance at the University of Illinois at Chicago and the author of Socially Responsible Investing for Dummies (Wiley 2009).