OOTS on Wealth – Being Rich 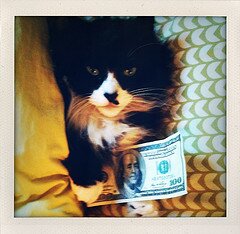 photo by softestthing/Flickr, used under a Creative Commons license

I was rich during my senior year of college.

Recruited away from the student newspaper to work for the local daily while still studying full-time, I earned roughly $12,000 writing columns, covering campus lectures, and churning out analysis of university politics.  I paid $167 a month in rent for a room in our Ithaca, New York fraternity house, drove a new car (a gift from my parents), had a ton of disposable income.

Realizing I was just about to leave town and still hadn’t eaten at many of the better known restaurants in Ithaca, I spent several weeks treating friends to the best food Ithaca had to offer. (Admittedly, I ate pizza subs and pasta most of the rest of the time.) During one trip to Chicago, I saw a gorgeous Armani sweater at Marshall Fields’ and bought it for the full price of around $300. I bought a fancy stereo with a six-disc CD changer and every new computer game I wanted. At the same time, I socked away several thousand dollars into a Roth IRA and made a decent sized donation to the University.

Moving to D.C. was a shock: I had a pretty-good-for-entry level salary of about $35,000 and shared a nice apartment. Each month, however, I found that I was pretty much broke after I paid rent. I bounced some checks, ate turkey wings for dinner, and went on an all Ramen diet partly to save money. Honestly, it took me roughly 3 years to get a material standard of living equal to the one I had in college. By then, of course, I didn’t feel rich at all: I discovered that the cheap suits and K-Mart clothes I wore weren’t good looking enough for work, that Ramen wasn’t really a very good dietary staple, that milk crates weren’t furniture, that I more-or-less needed a Washington Shakespeare Company subscription, and that flying to London made a much better vacation than crashing on friends’ floors in Buffalo. My needs, quite simply, expanded.

Now I’m married and have a son. My income has gone up, I live in a medium-sized free standing house and I’ve saved a decent amount. But I also have more debt and  find that there are genuine needs I never envisioned having (speech therapy for my son, to name just one). Last month, by some happenstance, my television and Internet bill actually came to the same $167 that I used to pay for rent. Yes, my life is better. Yes, I have more money. But I don’t feel rich at all.

If I doubled or even tripled my income, I still don’t think I’d feel rich or anything close to it: there’s a lot for sale in D.C. that I still couldn’t afford. In the end, I think that my former American Enterprise Institute colleague Charles Murray is right: the only ways to be rich in America are to make it onto the Forbes list or earn a decent income while living in a small town.

OOTS on Wealth is a new series on what it means – and how much money it takes – to feel and be wealthy in America. Read part one of the OOTS on Wealth series here.

Tagged as: OOTS on Wealth