Are housing prices falling? And if so, do we need Fannie and Freddie to save us? 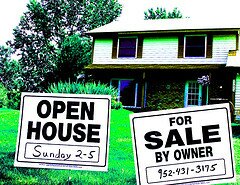 photo by transguyjay/Flickr, used under a Creative Commons license

Housing market data are notoriously bad; no two houses are alike and many buyers and sellers are driven by emotion. We don’t know the price of houses that didn’t get sold, nor do we have data on such things as decorating allowances used to report a higher price than what the buyer actually paid. Since the financial crisis, the government has been intervening in the housing market in ways that make the data even more complicated to interpret.

Consider the four main sources of national housing price information: the Federal Housing Finance Agency (FHFA); the National Association of Realtors; the S&P/Case-Shiller Home Price Indices; and Zillow.com’s Real Estate Market Reports. Each has a slightly different release schedule, so the last set of coinciding data is for the third quarter of 2010. In that time, the FHFA reported that seasonally adjusted prices fell 3.2 percent between 2009 and 2010. The National Association of Realtors looks at two main measures, the national median price and the total volume of existing home sales; in the third quarter, they reported that the national median price was down 0.2 percent but that the volume of sales was down by 25.3 percent. Case-Shiller’s national price index declined 1.65 percent in the third quarter, and Zillow.com’s Home Value Index declined 4.3 percent in the third quarter. Furthermore, the firm estimates that 23.3 percent of single-family homeowners owed more money than their house was worth.

Of course, September 2010 is practically ancient history in the financial markets. The numbers trickling in for the end of the year don’t look much better, however. Case-Shiller reports a decline of 1.6 percent in prices in its 20-city composite through the end of November. The Realtors show a very slight increase in the median price of 0.2 percent with a 19.5 percent decline in units sold for the fourth quarter of 2010 versus the fourth quarter of 2009. Zillow.com‘s fourth quarter numbers are truly depressing; they show a 5.9 percent year-over-year price decline leading to 27.0 percent of homeowners holding negative equity.

“While the tax credits did not hurt the housing market, they did delay its bottom by interrupting the housing correction that was taking place,” said Stan Humphries, Zillow.com’s chief economist, in a press release.

As most first-time homebuyers are looking for smaller and cheaper houses than people who are trading between houses, they tend to drag median data down; that explains why the Realtors’ data shows a stable median price amidst falling volume. And, in fact, the trade group is optimistic.

“Overall home prices have been steady and are up slightly,” says Walter Moloney, director of public affairs for the National Association of Realtors. “Our report on metro area home prices this week show most areas are up slightly or down slightly, and our forecast is for pretty much the same pattern this year.”

The NAR’s official forecast looks for the national median price to rise about 0.5 percent and selling prices to rise 8 percent based on a gradual drawdown in inventory.

Are the Realtors right? In a normal recession, prices for housing follow the growth in the overall economy, and so a recovery in prices would be expected to arrive at the same time that unemployment rates improve and corporate profits recover. This recession is different, though; it was caused by a financial crisis that, in turn, was caused by speculation in real estate.

The U.S. government has been intervening in the market, but only the first-time homebuyer credit seems to have had a supportive effect on prices and transactions. The Home Affordable Modification Program (HAMP) has been used by 673,919 homeowners at the end of 2010, covering fewer than one percent of the 112,451,000 owner-occupied housing units in the U.S. That’s not stimulating the market; it may even be holding it back. Interest rates are extremely low, but the banks that were stunned by the financial crisis aren’t lending money, nor are there new incentives on them to do so.

The government’s failure to intervene effectively is, in a way, good news for those trying to assess the next turn in the numbers. That is, as bad as some sets of real-estate sales numbers are, they may show more accurate price data than believed. The fourth-quarter declines, free of the effects of the tax credit, show that the market is correcting itself. The next numbers in the next three quarters may look as dismal as in the fourth quarter, but they could well be the last throes of decline.