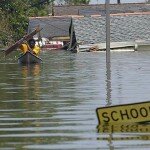 Flood insurance maps inform owners of property on U.S. coastlines and riverbanks of flood damage risks their properties might face. The Federal Emergency Management Agency (FEMA) is primarily responsible for drafting these maps, which are in the midst of a massive modernization effort.

The maps contain several different risk gradations, and “high-risk” designations have a major effect on the homeowners living there. Homeowners with federally backed mortgages (securitized by government-controlled Fannie Mae and Freddie Mac) are required to purchase flood insurance after a downgrade of status, even if the area has no previous history of flood damage. Wholly private mortgage securitizers generally follow suit also requiring homeowners in high-risk areas to purchase flood insurance.

Two things can result in areas being designated high-risk: when terrain changes (a body of water rises, for example) or, more importantly, when a levee gets decertified, meaning that meaning mappers believe it no longer confers 100-year protection, even if it’s otherwise in good condition.

For more than a century, the United States has attempted to control water almost entirely with levees and other “structural” means. During that time, the cost of flood damage has more than tripled in inflation-adjusted terms.

Groups such as SmarterSafer.org, an alliance of environmental advocacy organizations and free-market groups, say flood mitigation policy should focus on moving development away from environmentally sensitive and high-risk flood plains instead of building new levees. Others, particularly organizations and individuals in heavily flood-prone areas that already have many levees, favor the construction of more levees.

In recent weeks, legislation allowing homeowners to delay the issuance of flood rate maps in newly reclassified flood zones due to levee decertification has begun to be introduced in Congress. Proponents maintain the delay would allow more time for areas facing insurance rate hikes to repair or upgrade their levees and prepare for the higher flood insurance rates. Opponents say that although the current process could use improvements, a suspension of purchase mandates would make the problem worse.

The current decertification process has a lot of problems. Ignoring the existence of a functioning but not fully certified levee creates the appearance of greater risk that skews flood maps and raises insurance rates for hundreds of property owners. Plenty of decent-if-imperfect levees still confer some protection that NFIP rates should take into account. However, recent proposals by Congress to correct this problem overcompensate by ignoring the fact that deteriorating levees do not provide the same kind of protection as a fully functioning structure.

Recently three amendments were presented by Representative Rodney Alexander that would, according to a letter the National Wildlife Federation, would set a dangerous precedent and underestimate flood risks for homeowners by barring FEMA “from implementing new NFIP maps in areas with substantial flood risk and from setting prudent conditions in exchange for allowing at-risk communities to receive taxpayer-underwritten Federal flood insurance.”

Heartland agrees with NWF that these efforts to delay or stop the implementation of new FEMA maps in flood prone areas are dangerous. Flood maps must reflect real risk, and not be skewed by political efforts to keep insurance rates down or lower mitigation costs.

The country needs policies that don’t rely on government to protect people from all floods, but instead acknowledge that some areas are likely to flood, and if people choose to build there they should do so at their own risk. If the government gets involved, it should work to help people strengthen their houses and preserve natural habitats.

Previous post: Are housing prices falling? And if so, do we need Fannie and Freddie to save us?