Letter from Washington: Some Skepticism 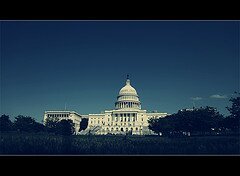 photo by VinothChandar/Flickr, used under a Creative Commons license

The House Republican Study Committee has issued a generally good set of budget recommendations for programs to eliminate. I’m all for it even though, like any political document, it deserves some skepticism. (I’ve written skeptically about it at FrumForum.)

There’s plenty of waste, however, that the RSC hasn’t bothered to touch. Here are four things Congress should look at:

Later this week, Heartland is hosting a conference in Texas along with our friends from PIA. Our keynote speaker in North Carolina Insurance Commissioner Wayne Goodwin and, in a state that’s trending Democratic, Goodwin (a Democrat) shows that commonsense free market principles can do a lot of good. I’ll be very interested in listen to his speech and see what he has to say about the progress he’s made.

The one serious current Republican proposal for reforming it—Rep. Paul Ryan’s Roadmap—is a good start in some ways but, in my judgment, not a true free-market solution. The plan, basically, cuts benefits in a variety of ways and then hopes to make it up by letting people invest some savings in a semi-private account that the government would insure never to decline in value below the initial principle. These accounts, in my judgment, are a huge new liability that could easily explode with enormous negative consequences for the economy.

A private account plan, it seems to me, will work best if it’s an “add on” that’s an addition to the current system rather than a carve out that reduces what goes into the current system.  This doesn’t mean that we should necessarily raise social security taxes but it does mean that the social security payroll tax should be distinct from anything that’s added onto it.

Previous post: A Change In Leadership Means Florida’s Residual Windstorm Insurance Market May Shrink, At Long Last – Or It May Not

Next post: Here are the GOP’s Budget Cuts — to Cut