Letter From Washington: Tear Em Down. Also, Come To A Briefing On The COASTAL Act This Thursday. 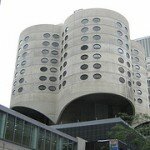 photo of the Prentice Women's Hospital by Zol87/Flickr, used under a Creative Commons license

This coming Thursday former South Carolina Director of Insurance and Heartland Policy Advisor Scott Richardson, Rob Melton, an engineer who has worked to develop the proposals  for dealing with coastal wind damage and me, will be presenting on Sen. Roger Wicker’s COASTAL Act’s. The event will take place in SVC 215 on June 23, 2011, at 2:00 p.m.

The COSATAL Act, of course, creates a Standardized Loss Allocation system for wind/water losses shared between the NFIP and wind insurers. We’ll also be handing out a paper that Scott wrote (with a bit of help from me) as to why the COASTAL Act is a good idea and talking about why it makes sense. (You can read more background on it here.)

Let’s start with the facts about the current system: the system is about as far from a true free market as you can get. Private insurers write heavily regulated coastal insurance policies and the federal government writes flood insurance. Ideally, private insurers should write both but, for the moment, that simply isn’t practical because no company seems willing to write flood insurance privately (although bills moving forward in the House and Senate would move things in that direction).

The current system creates a massive moral hazard for both insurers (who want to slough things off on the flood insurance program) and homeowners (who can sometimes get primary insurers to cover flood damage). The result is a string of very hard cases—when a windstorm totally destroys a house, nobody can really know, for sure, what happened—and an enormous, quite understandable political temptation to regulate insurers in such a way that they have to pay for damages they didn’t agree to cover in the first place. Messy disputes in courts, an arm of the government, often follows and just about everyone except the lawyers end up worse off as a result.

In this context, the real question is not how to free the market entirely—that isn’t possible given that no private party will write admitted market flood insurance for ordinary houses as a competitive price—but how to manage a mixed government/private system of insurance. And the COASTAL Act promises to provide a simple, easy-to-use formula in place of the current system of messy court disputes and regulations. It doesn’t increase the size of government, won’t cost the federal government a penny (a few local governments will have to invest in more sensors probably), and is optional for both insurers and insured individuals.

You have to be pretty nihilistic about the role of government to believe that such a move is anything other than a good one for the country and for people living in wind prone areas.

Writing in the Chicago Sun-Times, I recently weighed in on the controversy over the hospital where I was born: Chicago’s Prentice Women’s Hospital. My bottom line: don’t both saving it, at least with public money. The mere fact that something was built in the past does not mean that it should have to remain exactly where it is.

As an architectural showplace, it has to be said, Chicago is second to none in the United States but maintaining a vibrant architecture requires tearing down buildings that no longer meet current needs. Prentice is a particularly fitting example of a building that would be better off torn down.

One thing I’d like to clarify based on some comments I’ve gotten: the simple fact that it’s modern doesn’t make Prentice good or bad. In fact, what may be my favorite mid-century buildings of any sort, Meis Van Der Rohe’s 860-880 Lake Shore Drive buildings, are within a stone’s throw of Prentice.  There are plenty of other very nice, architecturally significant post-World War II buildings in the Loop including the controversial James R. Thompson Center (which, yes, isn’t all that functional and apparently costs a mint to heat and cool), and the New Spertus Institute Building. Likewise, for every really gorgeous older building (take, for example, the Carson Pierre Scott (soon to be Target, building), Chicago has some some crappy ones too like the god-awful petrified wedding cake (okay, if you insist, Beaux Arts) of the old Cook County Hospital (which also should have been torn down when the city had the chance.)

Wind insurance reform appears to be moving forward smartly in Texas. Although none of the bills go as far as I would have liked, both House and Senate have now passed legislation that would begin to solve many of the key problems that plague TWIA: they’ll improve environmental protections, raise rates in places where they should go up and do more. There are still a few more hurdles but Texas seems to be moving in the right direction.