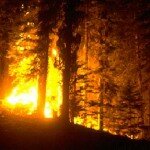 Look for powerful Houston businessmen to take on the state’s pension programs and make waves in the 2013 election cycle.

Members of the Greater Houston Partnership are building an organization aptly named Texans for Public Pension Reform.  Their concerns of the state running a pension business have been unaddressed in previous legislative sessions. However, with an ever tightening budget, the opportunity for pension reform is increasing.

Several large cities in Texas place much risk on taxpayers due to the guaranteed nature of the current system. For example, in 2004, Houston’s worker pension fund was 50% of the payroll. Currently, only 63% of the fund is covered by the city’s budget.  Thus, taxpayers’ funds will be required to fill in the gap.

We will have to wait and see if the legislators have the political will to make the sacrifices now to ensure financial security in the future.

Our home is only a few miles from one of the many wildfires raging in Central Texas.  Since they started on Sunday, neighbors, churches, and charities have unselfishly united to help each other’s physical and emotional needs.

FEMA did not arrive until Wednesday, and for that I am actually grateful.  For when the federal government did show up, it actually turned away our volunteer firefighters!

A great method to really bring a lesson home is to explain the concept through an object lesson, positioned it in terms that your audience can easily understand.

That is exactly what a recent college graduate did for his former peers. The Californian confronted Berkley students with this simple question…If you support the idea of wealth distribution are you willing to distribute your GPA to lower performing students? When faced with the obvious unfairness of such a suggestion, many admitted that they were not too fond of the notion.

This situation is not only a good lesson for the students, but for those of us educating the public as well.  Conservative principles are logically sound, but sometimes, they just need to personally relate to the reality of the situation.

To watch the students’ reactions go to Exposingleftists.com.

Next post: Going Green by Cutting Down on Government