What is the real value of gold? 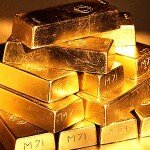 What is the real value of gold? With gold rates rising and falling rapidly over the last few years, questions over its role as a long term investment have become more common. Gold has been a popular monetary standard dating as far back as the ancient civilizations of Greece and Rome. Why has gold traditionally been held as a strong commodity, what is its intrinsic value? According to Eli Lehrer, there is little to no intrinsic value in gold.

Lehrer, vice president of Washington, DC operations at The Heartland Institute recent wrote an article in the Frum Forum about the value of gold as an investment, questioning its intrinsic value compared to its practical value in today’s economy. He contends gold is “good for nothing,” holding neither a significant industrial use nor the capability to be used as a mode of economic exchange.

“As I’ve said before, gold is, quite literally, good for nothing: it has no significant industrial uses (yes, it’s used in some electronics but there’s enough in a mall jewelry store for an entire year’s worth of iPhones) and can’t actually be used to buy anything either. Speculators can, indeed, get rich on gold but they need to figure out how to time the market. And nobody has ever devised a market-timing strategy for anything that works prospectively. (A retrospective one, of course, is quite easy.)”

He also argues that in the event of a major economic collapse, commodity crops and fuels, not gold, would be the items still retaining value. In the end, Eli believes the price of gold simply reflects investor uncertainty.

“Broad indexes of stocks and bonds, like gold, have also never been worth zero and, because they have something underlying them, their chances of hitting zero are a lot smaller. If a collapse took place, say, caused by a default on U.S. government bonds and the bankruptcy of all major corporations, commodity crops and fuels–not gold–would still retain value. The price of gold simply reflects’ investor uncertainty.”

Eli’s Frum Forum piece, “Gold: Good For Nothing,” was originally published September 27 and is available online at: http://www.frumforum.com/gold-good-for-nothing

Previous post: R.J. Lehmann to join The Heartland Institute, new editor of Out of the Storm News