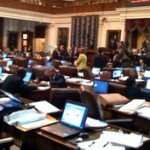 As I listened to the Republican Presidential candidate debate in Orlando, I thought, “Wouldn’t it be interesting to create a fantasy politics game like we enjoy fantasy football.” Instead of using polls to try and take the temperature of potential voters, why not find out the reason Americans like one candidate over another? In fantasy politics, users would choose which qualities, ideas, or issues admired in each candidate and build their own contender for the Oval office.  This method would reveal much more substantive content and significant nuances that are completely lost in straw polls of only a few hundred participants.  It would also focus the ultimate winner on specific priorities to implement once elected.  Ultimately, it would empower voters by giving them another opportunity to participate in the governing process.

The majority of the insurance bills signed into law last session took affect earlier this month.  However, their implementation will take months if not years in some cases. The Texas Department of Insurance Implementation Plan can be found at: http://www.tdi.texas.gov/reports/leg/82bills/houseimp.html for House bills and http://www.tdi.texas.gov/reports/leg/82bills/senateimp.html for Senate bills.

One of the new laws requires Texas drivers to insure up to $30,000 per person for bodily injury, $60,000 for bodily injury per accident and $25,000 for property damage.  These increases in liability have led to higher premiums throughout the state. In addition, the rising cost of medical fees contributes to higher rates for consumers. However, the trend is not absolute, so it still pays to shop around for the best price in town.

Previous post: What is the real value of gold?

Next post: Q&A with John Taylor of Herpeteculture House on owning exotic pets