The U.S. Treasury is expected to take a $22 billion loss on its assistance to bailed-out insurance giant American International Group 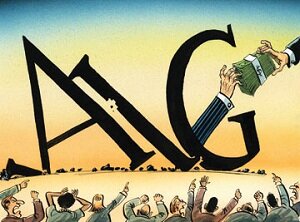 through the Troubled Asset Relief Program, according to new projections from the nonpartisan Congressional Budget Office.

Though $3 billion smaller than the estimate CBO put forward in December, the price tag on Treasury’s portion of the AIG bailout (which does not include mortgage securities purchased and held in special purpose vehicles by the New York Fed) still accounted for the overwhelming majority of the $32 billion it currently projects as the final cost of TARP.

CBO’s figures include all TARP transactions completed by Feb. 22, 2012.  The current estimate of the cost of TARP was $2 billion lower than the agency’s previous estimate of $34 billion. CBO projects the government will earn a net gain of $3 billion on the $313 billion that was used to support financial institutions, with the $22 billion cost of AIG offsetting most of $25 billion in gains on assistance to other financial institutions.

“CBO’s estimate of the cost of assistance to AIG has decreased from $25 billion to $22 billion because the market price for shares of AIG common stock increased significantly between November 2011 and late February 2012, thereby increasing the value of the Treasury’s investments,” CBO Director Doug Elmendorf wrote.

Treasury’s assistance to AIG has come in a variety of forms in the nearly four years since the company received its initially $85 billion credit facility from the New York Fed (the full extent of the assistance and credit extended to the company from the federal government ultimately would grow to more than $182 billion.) In one of many rounds of restructuring, Treasury bought $40 billion in preferred stock from the company and extended a $30 billion line of credit, less $165 million that was clawed back for bonuses paid to employees of AIG Financial Products and AIG Trading Group in March 2009. Another $8 billion in preferred shares were later issued to Treasury in exchange for AIG drawing down $8 billion on that line of credit

As of Feb. 22, AIG had repaid $12 billion on its $20 billion line of credit, while Treasury had recouped nearly $4 billion from the sale of 130 million shares of common stock at about $29 a share.  That left the remaining assistance to AIG at $50 billion, with Treasury having booked $2 billion in losses on its stake sales. (At $29 a share, the original 1.1 billion shares would be valued at $31.9 billion, $16.1 billion less than the $48 billion preferred stake Treasury exchanged for the shares. )

AIG repaid the final $8 billion on its line of credit in March 2012, largely from a sale of some of its stake in Asian life insurer AIA, while the Treasury recouped another $4 billion by selling 140 million shares of AIG stock.  Those March transactions were not included in the CBO report.

It’s noteworthy that CBO’s estimate does not include the tax revenues Treasury has agreed to give up by not treating the government’s take-over of AIG (its stake in the company remains 70%, and was at one time as high as 92%) as a material change in control.  That little bend of the tax rules allowed the company to book $17.7 billion in carry-forward tax loss benefits in the fourth quarter of 2011, the equivalent of about a decade of corporate taxes it would otherwise owe. As former Congressional Oversight Panel members Elizabeth Warren, Damon Silvers, Mark McWatters and Kenneth Troske put it in a March 29 op-ed in The Washington Post:

By any reasonable definition, the company changed ownership: A controlling stake passed from its stockholders to the federal government. As such, AIG should have been limited in rolling over past losses. Beginning in 2008, however, the U.S. Treasury jumped in with a special ruling that the financial rescue did not constitute a change in ownership. AIG was thus permitted to preserve its pre-bailout losses on its books, and now the company is using those losses to show enormous profits and dodge the taxes it owes on the billions it is earning today.

This is wrong. At first glance, it may appear that the federal government comes out even because it owns AIG stock and benefits as a stakeholder. But the government owns only about 70 percent of the company, while the deal subsidizes all shareholders, including the private parties that own the remainder. Creditors also benefit because a more profitable company is less likely to default on its loans.

In addition, the special tax deal permits AIG executives to collect more. Chief executive Robert Benmosche owns millions of dollars in AIG stock options and receives an enormous direct benefit from this deal. This special tax deal also masks the true cost of TARP by increasing the value of the government’s AIG stock at the expense of future tax revenue.

And in perhaps the most ominous sign yet, the insurance company that was brought down by its ill-fated bets on the mortgage market is showing signs it wants to jump right back into that market again. As owner of mortgage insurer United Guaranty Corp. (thanks to regulatory capital restraints at several competitors, one of relatively few private mortgage insurers still writing new business) AIG CEO Robert Benmosche said the company could use its existing mortgage underwriting tools to buy and sell whole mortgage loans, The Financial Times is reporting:

“[UGC] not only gives us some nice profit, but it gives us some incredible insight into a major asset,” said Mr Benmosche. “If we’re insuring a first-dollar loss, and we know the quality of what we’re doing, maybe there’s a way of expanding that.”