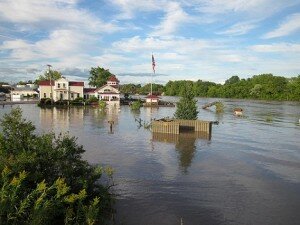 The Hill is reporting that a dispute between State Farm and other P&C insurers over the fate of some 800,000 former State Farm flood insurance policies threatens to hold up agreement on a five-year extension of the National Flood Insurance Program.

The NFIP, which had been slated to lapse Sept. 30, currently is operating under a four-day spending bill that will expire today.  The program is expected to be included in the six-week extension the U.S. House will approve today, funding the federal government through Nov.  18.

Two separate flood insurance reform bills, both of which include phase-outs of subsidized rates and orders for FEMA to explore private reinsurance for the program, passed the full House and the Senate Banking Committee earlier this year. Similar reform proposals have been on the table for more than six years, and the time for Congress to address long-standing problems with the NFIP, currently some $18 billion in debt, is long overdue.

But one sticking point to agreement, according to The Hill, is an industry dispute over hundreds of thousands of flood policies transferred from State Farm to FEMA’s NFIP Direct program when the company chose to exit the NFIP’s Write Your Own program last year. Under the Write Your Own program, private insurers are paid to market the policies and to adjust flood losses.

HR 1309 [the House bill] requires FEMA to come up with a plan to limit the number of policies it directly administers to 10 percent of the 5 million policy market.

Ben McKay, senior vice president of federal government relations for PCIAA said keeping the former State Farm policies out of the market stifles competition and hurts consumer choice. He argued that the NFIP program was never designed to have 16 percent of the market under direct FEMA administration.

State Farm spokesman Phil Supple countered that the House provision “is not about getting the federal government out of the flood insurance business, as some may contend. It is one group of insurance companies trying to poach business from a separate group of agents.”

He argued that consumers are not being given the choice to remain with their current agent under the House bill. This is because State Farm does not permit its independent agents to sell products administered by other insurance companies.

One hopes that this dispute will not delay adoption of the broader reforms which, while they do not go far enough in getting the federal government out of the flood insurance business, nonetheless mark an important first step toward NFIP solvency, limiting taxpayer exposure and ending subsidies to development in sensitive floodplain areas.  The Senate’s bill does not include the depopulation language. Thus, to the extent time for floor debate is strictly limited, it might offer the best opportunity for swift passage.

State Farm’s decision to exit the flood program last year was understandable, given the torrent of litigation the company experienced after Hurricane Katrina that sought coverage for risks the company believes it had never agreed to insure. At several points in recent years, former Rep. Gene Taylor, D-Miss. – who was among those filing suit against the company – sought to include a ban on anticoncurrent causation language, of the sort included in State Farm’s homeowners policies, as a prerequisite for participation in the WYO program. Given that backdrop, the company could hardly be blamed for making the business decision that the risk of facing similar situations in the future was greater than the fees they would earn from continuing as a WYO insurer.

However, it’s more difficult to have sympathy for the company’s position here, particularly if it delays reforms State Farm previously supported when it was a WYO insurer.  In many states, if a carrier the size of State Farm wished to exit the market, they would be asked to assist their policyholders in finding new coverage to avoid destabilizing the market. They aren’t being asked to do that in this case. State Farm instead transferred its policies to NFIP Direct, a government agency that traditionally has serviced only a small fraction of the business it now will be asked to take on. There have to be genuine concerns about the agency’s ability to mobilize an appropriate adjuster force to respond should a major flood disaster strike.

Given that daunting challenge, the depopulation language in the House bill seems both fair and reasonable. To the extent that State Farm is concerned about rival agents poaching business from their former flood policyholders, there were steps the company could have taken to address those concerns. It could have sold the renewal rights to a bidder of its choosing. In fact, the previously largest WYO insurer did exactly that earlier this year, when Fidelity National Financial sold its flood business to WRM America. State Farm also could have struck up referral agreements to allow its captive agents to place flood business with a specialist insurer that doesn’t have a traditional homeowners insurance business, of which there are several in the WYO program. It could even have included contract stipulations that there be no cross-selling of products to State Farm clients.

Having decided to leave the flood business behind, it is not reasonable for the company to complain that other private insurers might still find this an attractive block of business that they wish to assume. You cannot have your cake and eat it too. Or rather, once you’ve decided you don’t want any cake, it’s poor form to declare that no one else can have any either.