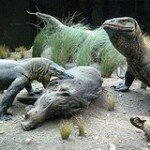 Owning a pet can be expensive. There’s the food, the vet visits, the toys and the cages. On top of that, most people who rent a house or an apartment have to put down a deposit of several hundred dollars to even keep an animal in their home.

But John Taylor thinks more people should consider owning exotic animals as pets. Taylor owns a menagerie of snakes, geckos, pythons, tarantulas and alligators. John Taylor writes and blogs about living with reptiles at reptileapartment.com and for Herpeteculture House, a digital magazine about reptiles. He has owned many exotic animals and reptiles over the years.

Below, he talks with Out of the Storm News about owning these offbeat creatures without breaking the bank.

Out of the Storm: Do you have to pay certain fees to keep your pets?

John Taylor: One thing I found out a lot later in life, I used to have a lot more reptiles. And basically, what would happen, is if I ever need to move the apartment owners would always ask if I had any pets, and I’d say, “No, of course not,” because technically, I didn’t consider them pets. They’re reptiles, not mammals. So I spent years hiding in the cover of darkness and bringing in reptiles and somehow never got questioned about it. But then I started reading the contracts and things and I come to find out that what you will find in many contracts in apartments and residential settings in the cities, pets are classified as mammals. What they are referring to as cats and dogs. The reason, from my understanding, is that cats and dogs can tear up carpet or cupboards. Basically, place wear and tear on the residence. When you tell them, I don’t really have pets per se, but I have these animals, exotic as they may be, within an enclosure, the apartment manager or homeowner — if you’re renting a house, — are usually OK with it. Nine times out of 10 that I’ve rented, I’ve never had to put down a deposit.

OOTS: What about city fees to keep an exotic animal within the city limits?

Taylor: If you want to keep something that is a venomous reptile, such as a rattlesnake or something of that nature, you’d definitely have to get a permit. A good colleague of mine goes with the rule of go with whoever restricts us the most on what you can keep. And what he is talking about is, yes, the federal government doesn’t care what is in your house. The state government probably doesn’t either. They don’t have time for it. However, as soon as someone gets bit, that’s when everybody gets involved.

It typically follows from federal to state to county to city. I’ve never come across it where the city says you can own something and the county says you can’t.

OOTS: So your animals, they aren’t restricted at all?

Taylor: No, not at all.  The spiders I’ve kept over the years, all spiders are venomous, even your common house spiders.

OOTS: Some people may think that owning an exotic animal is more expensive than a dog or cat. What do you think?

Taylor: I would say it’s probably, the initial outset, if you were to rescue a cat or dog or some sort of mammal pet, you’re probably going to spend just as much, if not more than you would on the initial onset of your first exotic reptile, because you do need to purchase the enclosure and all the lightning and heating systems. Next is the food, which is really where a lot of people turn their noses as reptiles, because they always see snakes eating mice. But bearded dragons eat crickets and a spring mix of salads. And you’re only feeding the bearded dragons once a day, vs. cats and dogs that eat multiple times a day. When you’re comparing the food items, you can buy 20 crickets for like a $1.50 and that can go for at least a couple of days. One mouse is about  $1.99 a piece and a large rat for a 6 to 8 foot snake is maybe $5.99, and that’s only once a week.

OOTS: So how much do you spend on all your animals each month?

Taylor: That’s a good question. Every month, if I added it all up, I think we go through about $150 a month overall. That’s basically, lighting, because with certain species you have to change the bulb every six months and your heating bulbs go out occasionally, and just regular vet check ups every six months. That’s including all my reptiles and my fish. The majority is definitely on food.

OOTS: How did you become interested in exotic animals?

Taylor: It’s funny you ask me that. Basically, I got a job at a pet shop very much later in life. I wasn’t one of these kids who grew up enjoying reptiles. I knew what they were and they were cool to look at, but I never in my wildest imagination thought I would own one for a pet. I got a job at the local pet shop in the fish section, which also has the reptile section. On my second day on the job I was cleaning fish tanks and my manager said today we’re going to go feed reptiles. The first time I ever saw a snake eat in person, it was just fascinating. That just kicked it off. I started picking up every magazine and book I could get my hands on. That was 12 years ago.

Next post: Is agreement in sight on NFIP reforms?