In these uncertain times of recessions, depressions, and Mayan Armageddons, it’s of the utmost importance that children know how to save money. That’s why Visa created “Money Metropolis,” a game whose tag line “Saving for a goal is a world of fun” brings to mind a very dull world indeed.

You play a child who is trying to make money and save towards a big goal that costs between $200 and $400. You make money by doing odd jobs around the town and try to avoid spending anything on frivolous items.

As a gamer, my background is in role playing games, so I know the importance of character creation. It helps to model your avatar after established fictional characters, so I try to think of what famous children could use better financial advice. I come up with Tiny Tim Cratchit from Dickens’s A Christmas Carol.

I consider Disney’s version to be definitive, so let’s use that as the model: 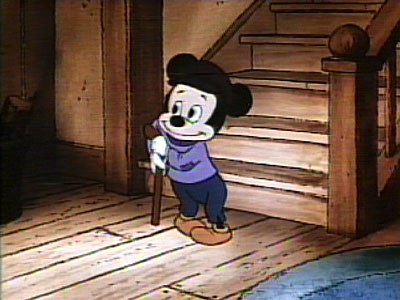 Sickly pale skin, dark hair/ears, patchy lavender clothing. Got it. Unfortunately, there are not a lot of options for changing appearances (and nowhere can I find the menu to select “Talking Mouse” or “Disabled Dickensian” as character traits), so I’m left with this:

About as good as can be expected from three skin tones, three hair colors, and three options for clothing, all of which are too “matchy-matchy” for my tastes.

Next I have to choose what goal Tiny Tim is saving for.

There are nine choices in total, including Bowling Party ($200), Pet Dog ($300), and Ski Trip ($400). The ski trip seemed cruel given Tim’s mobility issues, and the pet dog probably had a lot of hidden costs like “gout vaccination shots” that the Cratchits couldn’t afford. Ultimately, I choose Shopping Spree ($300), since that seemed the most like buying food, which was likely a Cratchit priority.

Tim starts with $40 from saved allowance, which I can only hope isn’t a payout from one of his parents’ life insurance policies.

Looking at the town map, there are lots of places to work, though disconcertingly, no other kids. Perhaps the rest of them were at the orphanage asking for more gruel or being abused by Miss Havisham. I take Tim to the grocery store first, since he’ll no doubt be hungry.

I bag the groceries as fast as possible, and despite dropping the box of milk on the ground (hopefully we got to keep that as a tip) Tim and I earn $10. I repeat the exercise twice more, with each successful bagging bringing Tiny Tim 3.3% closer to his dream of buying food.

At this point in the game, I’m already bored. I have $70, but if I want to buy my shopping spree, I need to bag groceries 23 more times. Each bagging session takes 30 seconds, so I’m stuck “playing” for another 11.5 minutes. There’s got to be a better way. You hear that, Grocery Store? Tiny Tim and I quit.

I imagine working at the gas station, running back and forth between cars, might be psychologically scarring for a child from the 19th century with one good leg, but times are tough and it’s got to pay more than the grocery store did.

It doesn’t. We make $10 for 50 seconds of work, filling up the gas tanks of 20 cars that have the nerve to have an impatience rating when they’re tipping me a measly 50 cents per tank. I play twice, just to make sure I’m not doing it wrong. No, this career sucks too. That’s it, Tiny Tim–they can take this job and shove it.

Making my way around the block, the next store is an arcade. That sounds like a great job to have! Let’s go, T.T., I’ll show you the wonders of the 21st century.

Except there are no jobs here, and the arcade looks obsolete for the ‘80s. There are two games, Caterpillar Trainer and Chompodon. The first is a rip-off of Snake with wobbly controls, and the second is like Pac-Man, except you’re a Godzilla monster trying to eat bananas before elephants catch you. Tiny Tim is confused. Most baffling of all, is the fact that there are games inside of a game, which cost $1 each, meaning you’re penalized for playing them! I’m down to $87.

I skip over raking and leaf blowing, as I’d have to spring for a rake ($20) or a leaf blower ($40). Leaf blowing, I later discovered after making a character modeled after Richie Rich, was the way to go. 7.5 seconds of work for $10? Totally worth the hearing loss.

I try to get a job delivering newspapers which pays $25, but in order to get it, I have to buy a bike for $100. If I have to work the job four times just to break even, it can’t be worth it. Plus I have no idea how Tim’s going to balance his crutches on the handlebars and throw newspapers. (Incidentally, Richie Rich succeeded enough at leaf blowing that he decided to buy a bike. The newspaper delivery business was underwhelming. It’s a dying industry.)

Finally, I stop by “Your House” and learn about the cushy job of babysitting. I earn $15 for 20 seconds of easy work. It’s like taking money from your parents for watching a baby…

I’m supposed to click on whatever makes noise–cat, dog, radio, phone–to keep it quiet enough so that the baby doesn’t wake up up. I don’t even have to be that great at it. As an experiment, I let the dog keep barking. As long as I answered the door, the baby kept sleeping. I’m pretty sure I even got to raid the fridge. I repeat my lazy babysitting a total of ten times, bringing my total up to $237. I try Tiny Tim’s hand at mowing the lawn over at Jack’s house, and they somehow still pay us despite our crashing the lawnmower into the pool four times. Still, $10 for 40 seconds of work is hardly worth the effort.

To finish up the last bit of work, I take Tim over to the library and we get a job shelving books in a roughly alphabetical order. What’s nice about working at the library, as opposed to mowing or bagging groceries, is that it’s impossible to fail. If Tim doesn’t know the right place to put a book, he can only fail three times before getting it right. Eventually we make enough money to buy our shopping spree. But when I click on the glowing star that says goal, all I’m treated to is this image:

There’s no sound effect, no animation, and nothing saying that I win. In fact, I can’t click anywhere. The game crashes. Truly, material possessions are hollow, hollow goals.

So if I were an impressionable youth, what would my takeaways from this game be? Not the worst possible lessons, perhaps.

1. Saving money is a tedious exercise in focusing on what you want while ignoring what you have to do to get it.
2. Most jobs are terribly boring.
3. Most jobs, in addition to being terribly boring, will underpay you as well.
4. The library isn’t the worst place to end up.
5. Babies will sleep through almost anything.
6. Leaf blowers are better than rakes.
7. It’s better to invest.